A platform for independent thinkers in poetry, prose and graphics.

ShiftPoetry™ Press is releasing its first two titles.  EMERGENCE – A WOMAN’S LIFE THROUGH POETRY AND MOTION by Susan Cambigue Tracey and COURBET’S BLUE PARROT POEMS OF LOVE AND SEX by Stephen Fife.

Sitwe Joseph – a nine year old AIDS orphan, a child of pandemic culture, is not phased by lingering Covid-19.  Instead he educates his friends, family, and community, as to how to deal with this latest rampant potentially uncontrollable virus.

$20 plus shipping and handling 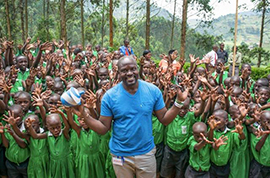 Jackson Kaguri, creator of what started out in affect as AIDS Orphanage Nyaka in his native Uganda, mines his younger self, mixed with youngsters his organization is helping to thrive – and a young voice emerges that is warm, informative, positive, aspirational, and life affirming.  Sitwe Joseph, a great storyteller,  runs with friends, most notable a little girl his age named Patience Mariza, creating a world that is book series worthy and dare we say the substance of a powerful colorful educational program and television series in the tradition of Dora the Explorer.

Go to www.Nyakaglobal.org for more information on this beautiful organization and creator Twesigye Jackson Kaguri. 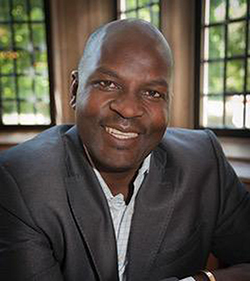 “Sitwe Joseph Fights Covid is the story of a young boy’s experience of the pandemic in rural Uganda and his determination to realise his dreams. Follow Sitwe and his friends as they navigate the challenges of school closures and learn about how to protect themselves and their families from Covid-19. Alongside sadness and loss, Sitwe and his friends discover strength and new opportunities as they teach their communities how to stay safe. The pandemic has affected us all; Sitwe’s community finds comfort and solidarity through participation in the Nyaka run, joining runners in New York and Kampala, as Uganda begins to move forward, reopening schools and reducing restrictions on daily life. This is Kaguri’s fifth children’s book and the third featuring Sitwe Joseph. It offers both an insight into the experience of Covid-19 from the perspective of a child in rural Uganda, and shares a sense of hope and agency as readers see how Sitwe is able to positively influence the lives of others, whilst staying true to his own dream of an education and a brighter future.”

— Gayle Clifford, PhD Author of My Mama, the Queen: A story about HIV

“Jackson brings Covid’s threat of death to life among young children, even as they devise ways to defeat the virus — lessons every child should learn.”

“Set in the beautiful highlands of southern Uganda surrounding Twesige Jackson Kaguri’s acclaimed Nyaka School, Sitwe Joseph Fights Covid is filled with valuable lessons befitting of our times—the importance of education, the need to respect our elders, and the time-honored African tradition of valuing the group and community over the self-centered interests of individuals. The endearing story of Sitwe Joseph Fights Covid offers parents and educators a valuable platform to discuss Covid-19 safety but also a myriad of public health and social dilemmas facing our world’s most valuable resource—our children. An engaging and inspiring must-read for children and adults alike!”

“Sitwe Joseph Fights COVID is an excellent book full of tools to catalyze great conversations among children. The book is relatable, relevant, and set in the realities of the Ugandan children. I think this book would help children learn that trying new things can be scary, but when they try and succeed, they overcome the fear that holds them back. My favorite part is that the book tactically introduces stories about the Pandemic by introducing the key concepts in the local language. Kaguri is an excellent writer who weaved local and global concepts into thrilling and educative text. I would recommend this book for use in the national curriculum to reach millions of Ugandan children.” 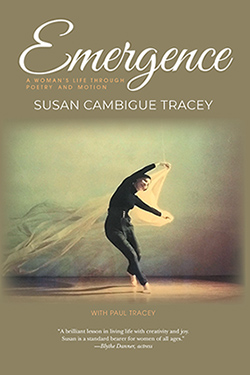 EMERGENCE – A WOMAN’S LIFE THROUGH POETRY AND MOTION

Actress, Blythe Danner, says Emergence is “a brilliant lesson in living life with creativity and joy.  Susan is a standard bearer for women of all ages.

Emergence – A Woman’s Life through Poetry and Motion is a graphic memoir that tells the author’s life story from her early years into her 80s. Poems range from charming ditties about a beloved rag doll and the skillset for a trapeze artist, to sad stories of the death of a child, and the author’s own cancer. Through colorful and compelling photographs, the reader is treated to a bit of Americana that gets lost in this age of technology. You won’t find Digital Nomads, but you will encounter generations of people living their lives in joy and creativity.

No matter your age, whether you wish to revisit earlier days, are curious about your own future or that of your friends and family, Emergence has something to offer everyone. The party never has to end, though sometimes tears do flow. Join the author and celebrate your own life “through Poetry and Motion.”

SUSAN CAMBIGUE TRACEY – an all around artist – has been a ShiftPoetry member for the last two years. In workshops she has told much of her life story and at some point dug into a trove of poems she wrote as a youngster. She has married her poetry into a sustained piece.

While working with ShiftPoetry mentor Howard Kern they jointly decided to add photos and some illustrations to the book. What has resulted is physically beautiful, entertaining, wise and empowering volume. 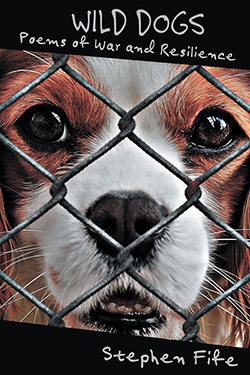 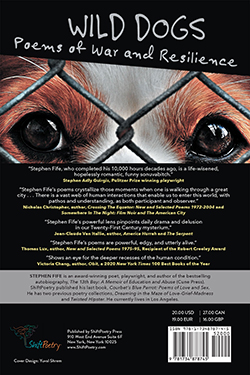 Wild Dogs: Poems of War and Resilience covers over 50 years of Steve Fife’s poetry, from 1969-2022, including powerful current reflections on the Ukrainian crisis. It is a companion book to Courbet’s Blue Parrot: Poems of Love and Sex, also published by ShiftPoetry Press, and also covering half a century of Fife’s sexy to soulful engagement with women. Wild Dogs is a book about the search for The Real and The True in human existence. A search for something to believe in, in the absence of God or religious orthodoxy. A search for a beauty in life that matches the beauty of the human spirit. A search for reasons to keep hoping after witnessing years of War and human conflict, the slaughter of innocents, the pain that people inflict on one another. And through it all there is laughter-grim, sad, hilarious. Laughter that heals many wounds. Laughter that is the only way to keep the Wild Dogs of Darkness at bay. 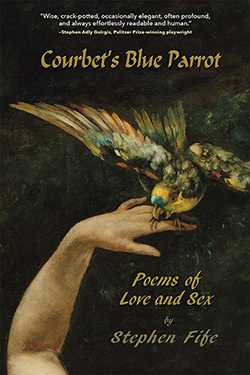 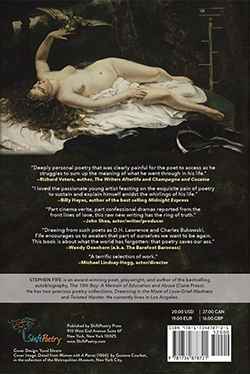 “A terrific selection of work … often about sex, and how it can be a wonder of the world.” – Michael Lindsay-Hogg

Courbet’s Blue Parrot is a collection of 46 poems – both heady and sexy – about Love and Sex that span 50 years of Stephen Fife’s poetry, from his youthful worship of feminine enchantments to feelings of pain and bitterness following his divorce and other breakups. In his earliest poem, One, Fife writes that “There is no me, there is no you, / There is not even us – there is only/ Love, a place where we can always run/ To find each other.” The ensuing poems explore the mysteries, ecstasies and conflicts to be found in this country of “Love” – a place that everyone visits, and where many of us have had our deepest and most enduring experiences.

Fife, whose examinations of desire date back to 1970, started writing a new series of poems during the lockdown in 2020. These poems are longer, more explicit, more confessional and multi-dimensional than anything he has attempted before. His purpose is to explore the nature of love and lust, from heartfelt romance to possessiveness, from the deadly serious to the farcically comic, from rose-tinged dreams and fantasies to violence, rage and disappointment. His point is that we can only move forward in discussions of gender and power dynamics by respecting ALL voices, and that understanding can only happen when the truth is seen in all its beauty and ugliness. Or, to put it more simply, Fife is attempting to “bring sexy back” to the male poetic POV, working in the tradition of Ovid, Petrarch, Andrew Marvell, and the best of Bukowski.

This is Fife’s 12th book, and his third poetry collection, after Dreaming in the Maze of Love-Grief-Madness (2014) and Twisted Hipster (2015), both published by Cune Press who also published Fife’s two memoirs, Best Revenge: How the Theatre Changed My Life and Has Been Killing Me Ever Since and The 13th Boy: A Memoir of Education and Abuse – an Amazon bestseller, which was featured in The Huffington Post and People Magazine.

Fife’s novel Angel’s Glance (2019), which Kirkus Reviews called, “A haunting and keenly observed meditation on relationships, parenthood, and the vagaries of celebrity and fame,” will be re-issued in 2022 under the title Loving Holly.

Fife came back to his first literary love, poetry, through ShiftPoetry(TM) workshops and ShiftPoetry Press is publishing COURBET’S BLUE PARROT as the first in a series of poetry volumes by Fife.

A graduate of Sarah Lawrence College and Columbia School of the Arts, Fife has written several stage plays, screenplays and streaming projects. His work has appeared in the New York Times, Village Voice and New Republic. He is the recipient of a Federal Poetry Grant.

“Drawing inspiration from such poets as D.H. Lawrence and Charles Bukowski, Fife encourages us to awaken the part of ourselves we want to be again. This book is about what the world has forgotten: that poetry saves our ass.” – Wendy Oxenhorn